Eunice Mangwane is a grandmother living in the small coastal village of Hamburg in the Eastern Cape. She is also a highly energetic community educator, who for years had been speaking to hundreds of villagers in her area on HIV/Aids, encouraging them to live safely, get tested, disclose their status, get help, protect others and de-stigmatise the pandemic. Disclosure had always been a key part of her message. ‘Disclose’, said Eunice, ‘HIV is nothing to be ashamed of’.

Then one day Eunice’s own life came face to face with the pandemic. Her daughter and grandson were both diagnosed HIV positive and this warm, wonderful, and spirited woman went into a deep, dark shell of depression, secrecy and silence. She knew there was nothing to be ashamed of but, she says, ‘When this thing hit me I just couldn’t bear it or share it’. This, despite being the person who was encouraging others to disclose. The irony and poignancy of where Eunice found herself is so touching.

After the shocking news, Eunice felt the only thing she could do was hold the truth close to her chest and continue working at her job at the Keiskamma Trust. She did her talks and her workshops, driving to hundreds of villages and speaking to thousands of people. ‘Disclose’, she would say, ‘It’s the only way to get the help you need’. Meanwhile only the local doctor and one or two people from her workplace were privy to the truth. Eunice trucked on, hiding her family’s secret, feeling like a fraud and gradually getting more and more physically ill.

This episode explores the effect that keeping the secret had on Eunice and the leap she took with, the blessing of her daughter, to free herself of her inner turmoil and embark on a journey to personal wellness inside and out. At the end of it all, with her daughter and grandson now well with the help of anti-retrovirals, Eunice says :

Don’t miss this very relevant and beautiful story, that teaches us all so much about the power of truth. 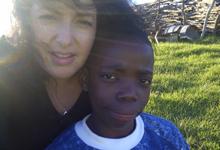