Sonja Kruse had always been a little different. A sensitive soul, Sonja often felt on the outside, always drawn to those who weren’t in the middle of things. The one’s who didn’t have a voice. She always had dreams, deep ones, about people and communities and the lines that connect us all. She loved to look at maps and dream of grand adventures, walking from community to community with a camera and a backpack. And feeling perfectly at home.

Then life happened, and Sonja slipped into the mainstream. As a grownup she moved to the city, started working, became engaged and found herself in the middle of a frenetic urban setting whose rhythm she found jarring and very different from her own. So she left the city to work at a game lodge, thinking that the stillness of the bush and connecting with its creatures might help fill the gap inside of her. Life improved but still there was a deep longing, something was still pulling at her. Something needed to be explored.

Then one day, while Sonja was standing on a porch overlooking the magnificent African landscape, she had a powerful life changing vision. She saw a net thrown across the country connecting people, with her as part of it. Sonja had always felt that South Arica was more than simply its headlines, that a spirit of goodwill and oneness connected its people beyond the divisions of culture and mistrust. She decided then and there to realise her dream.

The next morning she quit her job and within three weeks had set out on what has been described as one of the most touching and courageous initiatives by any South Africa to date. She walked and travelled across the country alone with just R100 (approximately $12 US dollars) in her pocket, collecting stories of Ubuntu (oneness) to share in a book which she is writing today. She became a travelling facilitator and connector of people, covering over 13 000km and returning home profoundly changed.

Sonya has become known as ‘The Ubuntu Girl’. A walking ambassador for the goodness of human spirit, the oneness of the South African people. She reminds us of the magnificent ties that bind us. She is soul and spirit in action and this episode will take you directly into her Ubuntu adventure.

Find out more about Sonja Kruse the Ubuntu Girl here 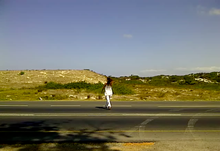